I got Bodie at a Flea Market.  I wanted a blue healer puppy for Christmas so I was keeping an eye out for anything that said Puppy.  We looked all over Trades Day and I didn't find anything all day.  We were in the car driving home when I saw a card board box with "Free Blue Eyed Puppies"  I asked mom if we could stop and look.  I was getting out of the car when I saw a little puppy stick it's head out of the box and look at me.  I got over to the box and there was Bodie, looking up at me with sky blue eyes.  I fell in love instantly!!  He was a little fuzz ball!!  I knew that he had to come home with me.  I brought home and put him with the goats.  He didn't like them at first but he learned to love them.  I was sooo surprised this past baby season, Bodie's first season with babies.  I wouldn't let him near the doe that was kidding at first because I didn't want him to hurt her.  I kept putting him in a different pen and he kept finding ways back to the laboring mother.  I finally let him stay.  I realized that he wanted to stay with the doe to make sure she was ok.  He knew she was in pain and wanted to protect her.  After the babies arrived he wanted to clean them.  I wouldn't let him though.  I separated him away from the new mom and her babies again.  I still wasn't sure if he would hurt them or not.  I went inside, positive that he couldn't get to them, only to look out the window a few minutes later and see him lying right in front of the new babies, keeping vigil over them.  From then on  I was no longer worried about him hurting the babies, I was more concerned that he would tear my fences up trying to get to them.  So I decided to let him stay put.  He was definitely a gift from God. 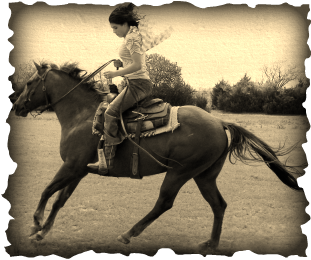 Little Joe is a red gelding that's about 12 or 13.  I rope, hog hunt, and many other things on Joe.  He's a sweet heart and and loves to be ridden, and the rub down afterwards.  I've had Joe for 10 plus years now can't begin to imagine how boring life would have been without him.  I'm glad that I have Joe to be there for me whenever I just need to go for a ride.
Powered by